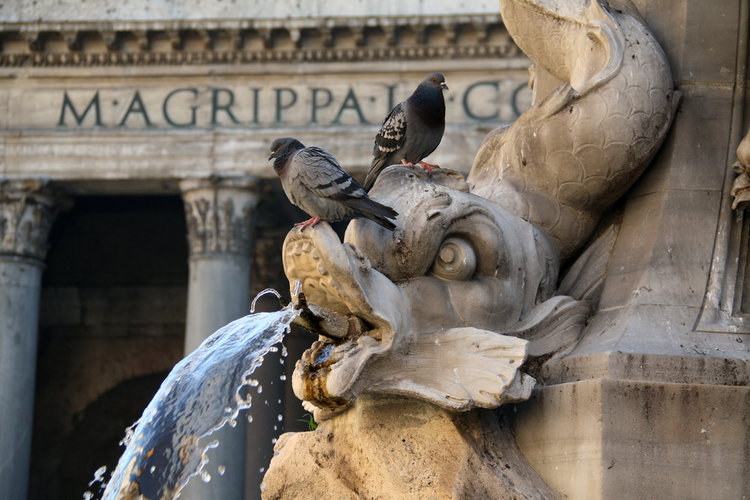 ​When in Rome, it’s difficult not to be captivated by the beauty of the city’s fountains.

Premium Spa hotels in the most picturesque cities of Switzerland!

Premium Spa hotels in the most picturesque cities of Switzerland!

Whether you are staying in a luxurious hotel in Rome, near Piazza Navona, Piazza Santa Maria in Trastevere, Piazza del Popolo, or in one of the many hostels of the city, it’s hard to miss the numerous fountains located in every part of the city. Every fountain is a symbol of a historical event, and the design is truly enchanting! Most fountains depict ancient Roman Gods and heroes. Statues of animals such as horses, lions, eagles and mythical creatures are also a common decoration of fountains and buildings around the city.

Check out some of the most notable Roman fountain architecture in the photos below:

Fountain located in Piazza della Rotonda, In front of the Pantheon.

Fountain in St. Peter's Square at the Vatican.

Northward view of the Piazza Navona with the fontana del Moro and the Sant'Agnese in Agone church at dusk.

Four Rivers fountain in "Piazza Navona". Navona Square is one of the best known landmarks of Italy and Europe.

Fountain of Neptune in Piazza Navona.

It's well known that Rome has been referred to as “the city of fountains.” Book a hotel in Rome, and see for yourself the unique beauty of the Roman architecture and design.

A Photo Collection of Natural Hot Springs around the world, for a relaxing getaway!

Shopping malls around the world you should visit at least once!

Amazing activities in the Maldives that will re-shape your vacations!

Written By:
Travel by Interest Creators' Team
4 Hotels to discover

5 Adventurous Hobbies Every Man Should Try at Least Once