Weird and Strange Foods you will meet when travelling in Thailand. 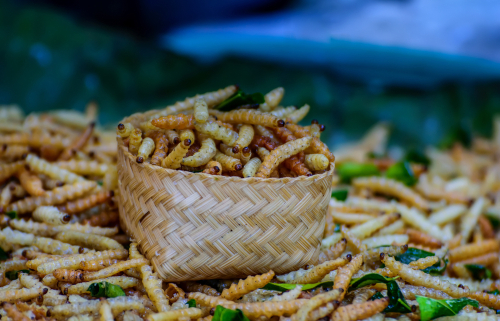 Discover some of the strangest Thai delicacies!

Hotels & Resorts with secluded experiences for couples and families

Hotels & Resorts with secluded experiences for couples and families

Food is significant in Thailand. Thai cuisine includes a wide range of ingredients and flavours. You can find numerous Thai restaurants in most western towns but when you travel in Thailand, local Thai food is a whole new experience! There are a lot of interesting and delicious dishes to discover, but some of them are usually described by westerners as bizarre and unusual.

From jellyfish and frogs, to fried worms and blood pork, here is a list with some of the strangest food you will find when visiting Thailand, because tasting weird food is always a highlight of holidays.

It is one of Thailand’s signature dishes. Freshness is extremely important for this potentially dangerous dish, because there are many high risks from eating raw meat, such as illnesses, caused by infectious worms and bacteria.

Mok Huak is served with fermented fish sauce in spicy soups, or steamed with spices and seasonings, sweet basil and herbs in banana-leaf wraps.

This dish is considered one of the most delicious foods in Thailand, and it is prepared with red ants and their eggs. The idea of eating ants along with their eggs sound disgusting to some, but surprisingly for many, it tastes better than it looks!

Street food carts of Thailand, especially in Bangkok are considered a tourist attraction, since anyone can find the most extraordinary food choices to try. One of these peculiar snacks is Hon Thai, deep fried silk worms, garnished with salt and pepper and sometimes a type of sauce. Similar to Hon Thai are the bamboo worms, called Rod Duran or else “express train.”

Silkworms are also considered a domesticated food insect in Thailand, the second one after bees.

Another famous bug, commonly consumed among the country, is the waterbug. These giant insects, known in Thai as Maeng Da, are often about 2/3 inches long and remind giant cockroaches. They are eaten boiled or deep fried with a lot of salt. The taste is often compared to that of scallops or shrimps.

Thai field workers were the first to come up with the idea of eating fried insects, such as grasshoppers (Takatan) and crickets (Chingrit), and now this food trend is widely spread throughout Thailand, found both in most food carts and restaurants. Locals prefer them because of their nutritious values.

They are high in protein and low in calories. It is usually served with a drop of Golden Mountain sauce and Thai pepper powder.

Balut is a controversial food item, originated from Philippines and later spread to other Asian countries. It is actually a developing duck embryo that has been boiled and served as a normal, innocent egg. Only when you crack it open you realize that your food is an unborn baby duck. Thais on the other hand, love its flavor and creamy-crunchy texture.

It is not unusual for Thais to consume their food raw, but there’s a special Thai dish, called Luu Muu, eaten mostly in northern Thailand, that goes against all cooking norms. The problem is caused by the main ingredient of the dish, fresh pig’s blood. It is eaten in the form of soup, while some versions also include other parts of the pig, such as intestines, liver and the heart.

We advise you to think twice before trying this strange soup, and if you try it, do it at your own risk!

Imposing Photos of the most Historic sites in the heart of Athens!

48 hours in a music lovers luxury hotel in Phuket

Discover Bangkok’s thriving Gay Nightlife while staying in a Luxury Apartment in Sathorn!

Top 5 things to do in Nepal

Meet one of the best wedding villas in Greece!