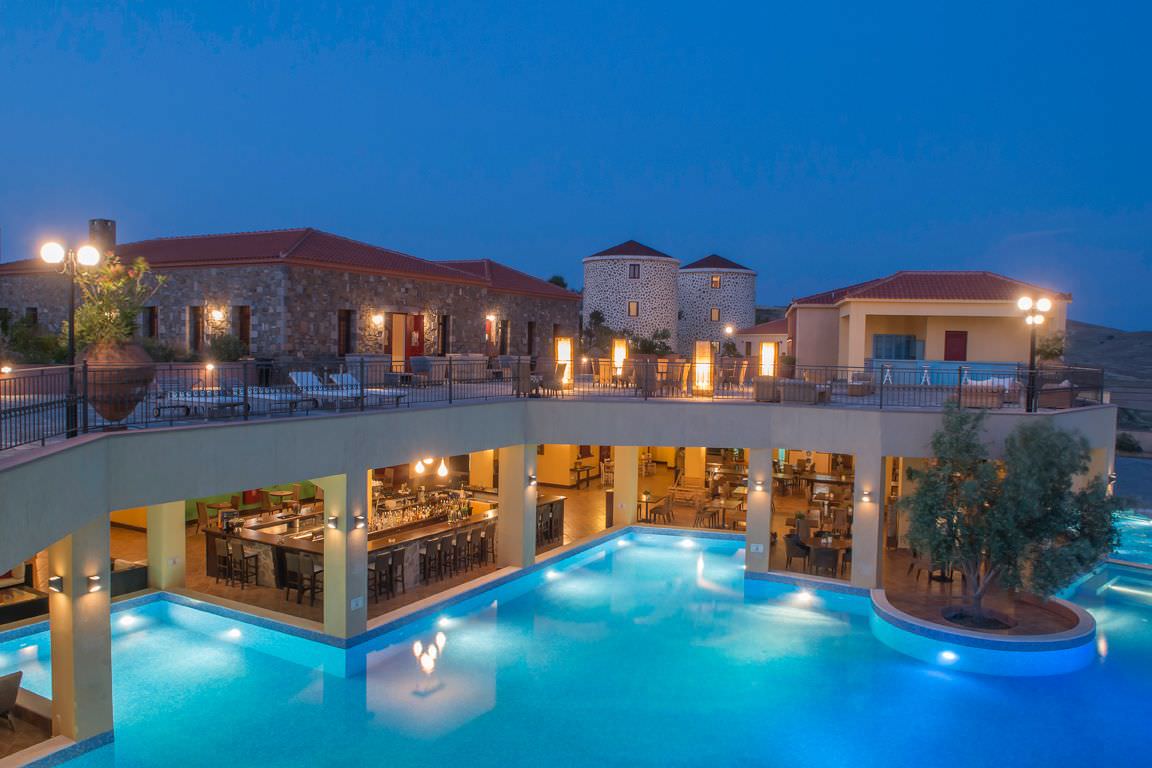 This hotel has become a reference point for the visitors of Lemnos, and one of the top destinations to help you discover the island’s beauty.

Romantic All Inclusive Resorts in Thailand

Romantic All Inclusive Resorts in Thailand

Family Hotels & Resorts in Portugal that your kids will love!

Family Hotels & Resorts in Portugal that your kids will love!

Greek Islands are widely popular for their outstanding Mediterranean beauty. However, many of them are unknown to the tourism as you hardly ever hear about them. One of the least known Greek islands of the North-East Aegean Sea is definitely Lemnos, found between Lesvos and Thassos. The island is so calm and easy, that even during the high season (July-August), you won't find many tourists.

Lemnos has a mountainous terrain, and many beautiful sandy beaches. From great windsurfing locations, to serene beaches to sunbathe, Lemnos has it all. Considering the sights on the island, there are plenty of them, among of which included a Medieval Castle and an ancient cave connected to Greek Mythology and Kaveiria Mysteries. Other major points of attraction include petrified trees, the Sand Dunes (no elsewhere in Greece you meet such a place) and the natural Salt Lakes, the biggest in Balkans!

Varos used to be among the oldest villages in Lemnos, abandoned for many years, yet maintaining its historical & natural beauty. For many, it was a sore sight to watch, while it was about to be demolished, until 2010, when a Greek developer decided to bring life back in Varos, converting the village into a small luxury hotel.

Well, the mountainside hotel Varos Village offers more than the typical hotel in Greece. The travelers seem to be very interested to see the remnants of the historical buildings of Varos, even the ones who do not stay there. Well, it is only natural, since the hotel resides in one of the very few most historical buildings in Lemnos. Some of the most popular sights in Varos Village hotel & residences are:

Archontiko: This noble house used to be the former mansion of Mr. Ioannis Pavlidis, and it is currently among the most beautiful houses in the whole village. It is fully restored to its former glory!

Petrino: This used to be the maternity clinic of the island, owned by Mr. Pavlidis. It was later converted into the German headquarters. Today, it has been fully restored using only local stone hewn out from volcanic rocks & Terra Lemnia mud.

Traditional Kafeneio: This was the largest of the four coffee shops in the village. There was a grocery shop at the rear of the kafeneio, while its upper floor was used as a family residence. It’s a great place to drink Greek Coffee and relive moments like the local villagers did almost 200 years ago.

Click Here to read more about the sights of Varos Village Hotel.

The Greek breakfast in Varos Village Hotel & Residences reflects greatly on the hotel's traditional character. Since breakfast is the most important meal of the day, Varos Village Hotel has included a good selection of fresh local products in its buffet, which are exclusively sourced from Greek and local producers. It includes a selection of breads and rusks, traditional pies, omelettes prepared with fresh eggs and seasonal vegetables, local cheeses made from sheep’s and goat’s milk, thyme honey, homemade marmalades, tahini, Greek yogurt from sheep milk, and fresh fruits from the hotel’s gardens.

During the day, you can enjoy a selection of healthy sandwiches and salads, traditional Greek “souvlaki”, and local snacks alongside refreshments and chilled Lemnian wines in Elia Pool Bar Restaurant. Either you want to relax and swim by the pool, or simply want to gaze the night sky with a delicious and fruitful cocktail, Elia Pool Bar is there for you!

Veranda Restaurant is a combination of a tavern and a high-end restaurant. There, you can try a wide range of traditional dishes featuring unique flavors of the island as well as ingredients like local cheese, beans, pasta, poultry, lamb, fish and Muscat wine. The dishes are further enriched by the hotel’s extensive wine list, as well as the traditional Greek drinks of “ouzo” and “tsipouro” and first row ingredients from hotel’s bio veggie gardens. Veranda restaurant is the only awarded restaurant in the whole island, from Hellenic Organization of Tourism.

Still not as traditional as you would like to? Well, you should try collecting fresh ingredients from the hotel’s backyard. Indeed! The hotel has an impressive garden with vegetables, fruits and herbs, where you can collect fresh ingredients and cook local recipes by yourself. And even if you don’t like cooking, the hotel’s staff can prepare your “crops” for you, either at the restaurant or in the privacy of your own veranda!

A Short Wellness Experience in Lemnos

Your wellness experience in Lemnos when staying in Varos Village, starts from with-in the hotel. You can choose any type of massage you prefer, and a hotel’s specialist will make sure to re-energize your mind, body and soul at the specially designed massage rooms of the hotel. There is also sauna room to enjoy your steam bath complimentary, as a Varos Village guest!

If you are one of those people who cannot live without working out, the hotel offers to all of its guests, complimentary access to the gym, which is open from very early in the morning, if you want to work out before breakfast, up until 10 pm. The gym is fully equipped with advanced cardio equipment!

But your wellness experience is not limited in the resort. The Thermal Springs of Lemnos are said to exist even before 1546, and they are visited by people for centuries now. Nowadays, modern wellness methods are used to achieve the utmost relaxation and serenity, while the unique natural environment of Lemnos will make you feel cozy and relaxed.

Lemnos Experiences: Activities that can fill your days on the island!

There are numerous activities to do on the island of Lemnos, but the island is reputed for its stunning beaches. The majority of the beaches are organized, with sun loungers and sun beds, while the referred beaches are from 3 minute to 10 minutes’ drive from the hotel.

Kotsinas beach is the closest, about 3 minutes by car, and it’s ideal for couples & families with children due to shallow depth and warm waters. Keros Beach, famous spot to kite surfers and windsurfers for its warm waters and close-to-perfect wind conditions during the summer months, is 10 minutes away from the hotel and is characterized by its warm and calm waters.Hotel offers voucher for free introduction kitesurf lesson! Fanaraki Beach is also 10 minutes away and it’s known for its breathtaking shaped rocks and crystal clear blue waters!

*A great way to discover the beaches of Lemnos while also getting fit is by bike. You can ask more information at the hotel’s Reception Desk.

Fishing is a beloved activity by the locals, so why don’t you grab the chance and learn how to fish as well. Of course, at the end of the activity, you can even cook the fish that you have caught and cook a delicious “kakavia” soup.

Lemnos is one of the best islands to discover the underwater world of the Aegean Sea. There is also a great Scuba Diving Center nearby the hotel. In addition to the offered PADI scuba diving course, you can even go on a cruise around the island.

From kestrels, to white swans, to pink flamingos, Lemnos is a paradise for bird-watchers. Yes, you read right, birdwatching is a much beloved activity on the island, which is no wonder if you consider the temperate climate of the island. The best area to see birds is the Salt Lake of “Chorarolimni”.

The "Best Romantic Hotels Around the World" for 2019 are coming to Travel by Interest!

A wellness holiday experience to remember, in Gran Canaria

The finest Greek Boutique hotels to visit this August!